Rishi Sunak has undoubtedly made a name for himself as Chancellor of the Exchequer during these difficult times. As we move towards the next budget on 3rd March, there are rumours, counter rumours, and speculation about what may or may not happen. We all know that tax increases are inevitable at some point, but is it too soon for the government to increase tax rates?

There seems to be a consensus that income tax rates are unlikely to change in the current environment. However, while Sunak may delay any direct income tax rate increases, the devil is in the detail.

At the moment, income tax bands are as follows:

Traditionally, the various income tax bands are increased year-on-year, often with an eye on inflation and the cost-of-living. This ensures that generally, your wages will increase in line with the tax bands, resulting in similar taxation levels in the future. However, there is a term used in politics known as "fiscal drag.”

There is speculation that Sunak will not increase the bands relating to the above tax rates. This is demonstrated in the following example:

In this example, your personal allowance covers your salary, so you don't pay any tax. Let's assume that your wages increased by 3%, but Sunak decided not to increase the tax bands in line with inflation of 3%.

So, even though your wages only increase by inflation, you would incur an income tax charge of £75 per annum. The same process can be applied to those on the higher tax rate where an inflation-based increase in salary may push them into the next tax band. A ruse often used in times of fiscal pressure and one to watch out for next week.

When the Chancellor introduced a stamp duty land tax holiday in July 2020, there was an immediate impact on the property market. This resulted in a tax exemption on the first £500,000 of a property purchase value in England and Northern Ireland. A potential saving of up to £15,000 certainly caught the attention of property buyers.

We also saw similar schemes in Scotland and Wales, although the tax exemption band was reduced to £250,000. The schemes were expected to end on 31st March, although there is intense speculation of an extension until June.

The property market is an integral part of the UK economy and heavily linked with personal wealth. Just before speculation of an extension began, there were signs that property demand was starting to tail off as the initial exemption period approached expiry. So far, the Chancellor has done little to dampen expectations of an extension, so this may be one of the more "certain" changes we will see on Wednesday.

Where next for fuel duty?

There are two issues to consider regarding fuel duty in the UK, which currently stands at 57.95p per litre of petrol, diesel, biodiesel, and bioethanol. This rate has remained frozen for ten years. However, as you can see from the below ten-year graph, the rate at which it was frozen was based on a significantly higher crude oil price. 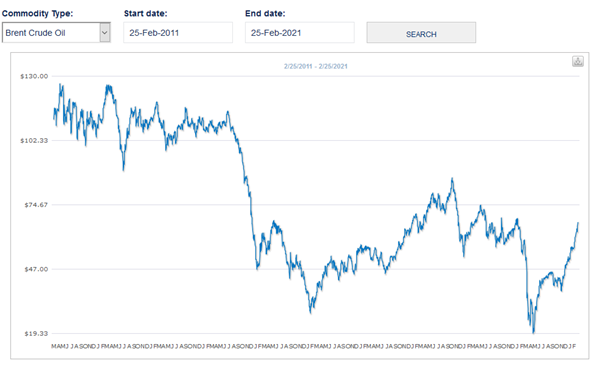 Case for increase in fuel duty

Motorists have long been a soft target for governments looking to raise funds in fiscally challenging times. The Chancellor could claim that the rate has not increased for ten years and therefore required some "adjustment". This would also be backed by the "green lobby" and fit perfectly with the government's public green credentials. Increasing the cost of fossil fuels, and favouring green fuels, would appeal to the broader population, although potentially alienate motorists.

It might be a case that Brexit will come back to haunt the UK government if they were indeed looking to increase fuel duty. We would hear the screams of derision from the haulage industry far and wide. They have seen a massive increase in their running costs, paperwork and an often less than smooth transfer into the new post-Brexit regulatory system. Even though Sunak may be tempted to increase fuel duty, it would be a challenge at best - political suicide at worst.

As you approach retirement, many people are looking to increase their pension contributions to maximise their retirement income. The UK government is currently looking to replenish funds with an expected budget deficit of £400 billion for the current tax year. The Robin Hood strategy of "robbing the rich, to pay the poor" has been used and considered by many Chancellors. There is speculation that Sunak could introduce a flat pension tax relief rate of around 25%, which would deliver potentially huge savings.

The downside is that this would significantly reduce retirement pension funds and may increase dependence upon state benefits. Whether we may see a temporary pension tax relief rate is another option. A word of caution, we only need to look back to the Gordon Brown pension tax raid to see the colossal damage this can have on pension savings.

Might we see adjustments to the capital gains tax regime?

Capital gains tax is another subject that is regularly discussed at great length just before government budgets. We have seen changes in recent years with the current regime as follows:

Seemingly, one of the main driving forces for this particular idea is that it would tax those towards the higher wealth bands again. There's also the fact that capital gains tax collection has proved to be particularly expensive compared to receipts. Maybe a simplifying of the bands is the way forward?

Other changes under consideration

Recent press speculation has covered a myriad of different options for the Chancellor, including:

There are many ways in which Rishi Sunak could subtly increase revenues for the Treasury. The difficulty is that with a potential £400 billion budget deficit for the current tax year, a subtle approach will not balance the books. It is worth noting that the IFS's current guidance suggests that the UK will still have a budget deficit of circa £130 billion in the tax year 2024/25. Lots of work left for the Chancellor!

What to expect in Wednesday’s budget

The Chancellor faces a challenging balancing act when he announces his budget on Wednesday. On the one hand, the UK economy is still relatively fragile, and any further lockdowns would be catastrophic. On the other hand, the UK government is expected to announce a budget deficit for the current tax year of around £400 billion. Even though interest rates are at historic lows, these borrowings and any additional borrowing requirements will still need to be repaid at some point.

Too soon to tap taxpayers for more of their hard-earned income? We shall see!

Mark Benson
Mark joined Age Group in 2020 and has over 10 years’ experience specialising in writing around property, finance, and investment subjects.
The content on pensiontimes.co.uk is for informational and educational purposes only and should not be construed as professional financial advice. Should you need such advice, consult a licensed financial advisor. Any references to products, offers, rates and services from third parties advertised are served by those third parties and are subject to change. We may have financial relationships with some of the companies mentioned on this website. We strive to write accurate and genuine reviews and articles, and all views and opinions expressed are solely those of the authors
What to read next...
Krista Lomu
Everything you need to know about buy now, pay later
Stela Gineva
Top 6 best budgeting apps
Reno Charlton
Crippling energy price hikes to take effect in April
X
Everything you need to know about pensions, in one place. Get our FREE Ultimate Guide to Pensions now!
X
X