Despite so-called “safeguards” to stop the financial elite screwing the system, the rich always seem to get richer. Many of us are totally unaware of what is going on behind-the-scenes and the massive disparities in wealth, even during the midst of a pandemic!

While the various catering establishments across the House of Commons “are not subsidised,” they continue to run at a substantial annual loss. When you consider that taxpayer's money is used to provide these services, what is the difference between a loss and a subsidy?

It is worth noting that the tax years 2017/18 and 2015/16 were election years, with MPs and House of Commons staff not present throughout the year. If you ran a catering business which was losing £2.6 million a year, well, you wouldn’t be in business for very long!

Let's not leave out the House of Lords, where a peer's daily allowance was recently increased from £313 up to £323 per day. When the general public struggles to make ends meet, this equates to a tax-free income of over £48,000 per year for the “typical” 150 days the upper house sits each year.

According to the Office for National Statistics, the average salary in the UK is just over £26,208 per annum. The average employee will also work 253 days per year which, in House of Lords terms, equates to £103 a day - before tax and deductions, of course!

2. The myth of equality legislation

In recent times we have seen the introduction of the national minimum wage, the living wage and greater entitlements for temporary staff. There have also been various attempts to rein in executive pay. If you look at the graph below, you will see wealth distribution across the UK has been squeezed for those at the lower end of the spectrum. However, those in the higher deciles actually managed to increase their share of wealth!

While we await the 2020 report, don’t forget that in 2007/8 we saw the US sub-prime mortgage crash. This created one of the worst economic depressions in living history. So, how did the wealthy manage to retain their wealth? 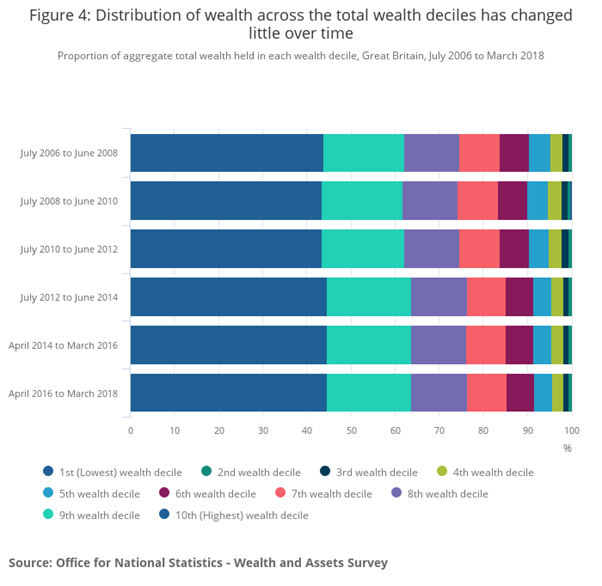 Every time you hear a politician suggest that we are “in this together,” just remember the above graph!

In years gone by, monitoring the wealth of those outside of the UK never really interested many people. Since the emergence of the Internet, we have seen the creation of a global economy with companies such as Amazon, Microsoft, Facebook, Google and many others dictating our everyday life.

The Bloomberg Billionaires index gives a fascinating insight into the spread of wealth across the world. As of 20 January 2021, the index was dominated by technology billionaires, accounting for 7 of the world's top 10 billionaires. The top five wealthiest people as at 20 January 2021 were:

As we grow more and more dependent on technology, the rich will get richer as consumers follow the pied pipers. We have been promised legislation, anti-trust laws have been introduced worldwide, but still, the power of technology grows. It is common knowledge that Facebook and other social media platforms have played an enormous role in many prominent elections around the world.

A recent report on the Inc.com website suggested that Elon Musk could in time become the world’s first dollar trillionaire. However, Jeff Bezos was also thought to be on track for that "honour" as Amazon sales skyrocketed during the past year due to Covid-19!

If ever anyone needed confirmation of the power of the rich and famous, it is emerging during this pandemic. A report by the Resolution Foundation perfectly illustrates the growing gap of inequality in the UK. Only 50% of lower-income households are saving at the same level they did pre-pandemic. On the flip side, the wealthiest 20% in the UK have saved a staggering £23 billion during this lockdown, predominantly due to shop closures and travel restrictions.

The knock-on effect of this is only just beginning to filter through. We have seen significant job cuts across luxury carmakers, high-class fashion outlets are jettisoning staff, and many restaurants are struggling. The same report suggested that those on an annual income of less than £20,000 per annum reported a fall in income. The situation appears to be much worse amongst those on less than £10,000 per annum.

It is unlikely that we will return to anywhere near “normal movement” for the foreseeable future. This can only mean one thing, the rich saving more while the poorest become unemployment statistics. Has there ever been a more unambiguous indication of how both local and global economies depend on the wealthiest people?

5. When big businesses flex their muscles!

There have been many examples of big businesses flexing their financial muscles across the globe. However, it is difficult to find any examples anywhere near the size of the Apple/Irish government tax deal.

This issue goes back to 1991 when Apple was but a fraction of its current worth, which is now over $2 trillion. At the time, Apple was the largest employer in Cork, reporting net profit margins of around 33%, and looking to ramp up business. The company had previously benefited hugely from Export Profits Sales Relief (a zero tax rate on profits made on exports from Ireland), but this relief was to be abolished. At the time, press reports suggested the company was “considering other options” during talks with the Irish government.

In a deal the European Union would later investigate, the Irish government agreed Apple would only pay tax on a specific element of earnings  - the equivalent of just 0.05%, a fraction of employee taxation! As the years rolled by, more and more Apple business in the EU was conducted via its Irish subsidiary. In 2016, the European Union ruled that the Irish government had given Apple illegal tax breaks. The company was ordered to repay €13 billion (£11.6 billion) in back taxes.

But the story doesn’t end here!

Even though the Irish government was still standing by the previous tax arrangement, it was ordered to recoup back taxes from Apple. The company then appealed to the second-highest court in the European Union. Last year, the previous ruling was annulled. The court stated that the European Commission failed to present evidence to show that EU competition rules had been broken. The European Commission has decided to appeal to the highest court in the European Union, and we await developments.

If we look back to 2005, Apple was capped at a mere $30 billion. The company now has a market capitalisation of over $2 trillion, with many investors making huge gains. Was Ireland robbed of €13 billion in back taxes? The highest court in the European Union will very soon decide.

These five examples are just the tip of the iceberg!

Wealth brings with it power and influence, of that there is no doubt. While many people have taken risks to build up their wealth, this has left a colossal inequality void. This power is perhaps best summed up in the famous saying, “If you owe the bank £100, that’s your problem; if you owe the bank £100 million, that’s the bank’s problem.”

Whether tax breaks, sweetheart deals with the government, or the subsidising of the political elite, it seems that those at the bottom of the income chain are always left to pick up the financial pieces.

Mark Benson
Mark joined Age Group in 2020 and has over 10 years’ experience specialising in writing around property, finance, and investment subjects.
The content on pensiontimes.co.uk is for informational and educational purposes only and should not be construed as professional financial advice. Should you need such advice, consult a licensed financial advisor. Any references to products, offers, rates and services from third parties advertised are served by those third parties and are subject to change. We may have financial relationships with some of the companies mentioned on this website. We strive to write accurate and genuine reviews and articles, and all views and opinions expressed are solely those of the authors
What to read next...
Krista Lomu
Everything you need to know about buy now, pay later
Stela Gineva
Top 6 best budgeting apps
Reno Charlton
Crippling energy price hikes to take effect in April
X
Everything you need to know about pensions, in one place. Get our FREE Ultimate Guide to Pensions now!
X
X