Is the UK state pension really the lowest in Europe?

You will probably have seen the state pension “comparisons” between the UK and the likes of France, Spain and Germany. These figures have been posted thousands of times on social media. However, the pension comparisons have been researched in detail by the Full Fact website. Aside from the figures being out of date, they are also misleading.

The main difference is that the UK state pension is a flat rate (the full new state pension is actually £175.20 per week for 2020/21). The state pensions for France, Spain and Germany are calculated very differently. They are dependent upon years of contributions and age, and these are the maximum payments, for higher earners. The figures are not the average, not the standard and certainly not a flat-rate state pension. Myth blown!

How can you stop the government from stealing your national insurance pension pot?

This is one of the main reasons why the UK government is looking to extend the state pension age. We will all be forced to work longer, pay additional national insurance contributions, deferring our state pension entitlement until further down the line. While currently under review, the pensions triple lock is causing a massive problem for state pension funding.

National insurance contributions increase in line with wage inflation, but this has been low for some time. However, under the triple lock system, the cost of paying the state pension has increased faster than government income from national insurance contributions. This is making a tricky situation even worse, hence the ongoing state pension reforms.

Do MPs still have a final salary pension scheme?

Traditionally, as we grow older, our income will increase at least in line with inflation. Consequently, those that are lucky enough to be part of a final salary pension scheme should, in theory, be receiving their highest levels of income upon retirement. Unfortunately, final salary pension schemes for non-public sector workers are now very rare.

Do MPs still have a final salary pension scheme?

Yes. While MPs continue to vote to increase the age at which we will receive the state pension, they are members of a part taxpayer-funded pension scheme. You may be relieved to learn that this is not a final salary pension scheme, but you shouldn’t be!

MPs accumulate pension entitlements of between 1/40th and 1/50th of their salary for each year they are an MP. The actual figure will depend on whether they make additional contributions to the scheme. After joining Parliament, MPs tend to move up the ranks taking on extra committee work and ministerial posts. Towards the end of their career in Parliament, they may move to the backbenches until they formally retire.

Consequently, an ambitious and forward-thinking MP will likely see a significant spike in their earnings during their "mid-years" in Parliament. Especially if they're lucky enough to be in a safe seat and at low risk of losing their place on the gravy train! If their MP pension entitlement in retirement was based on their final salary, they could “lose out.” So, intriguingly, the pension entitlement of an MP is based upon their average salary. Not their final salary, as with traditional final salary pension schemes, which is a very subtle twist.

There is a consensus that life expectancy in the UK continues to increase year-on-year. This is correct to a certain extent, but there has been a significant tail off in improvements in recent years. This is demonstrated by the following graph from the Office for National Statistics. 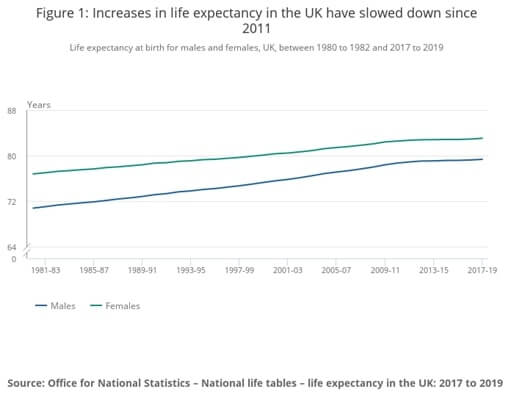 Between 2010 and 2020, the age at which a woman could access their state pension increased from 60 years to 66 years. The equivalent for a man risen from 65 years to 66 years. As early as 2026, this could increase to 67 for both men and women, rising to 68 between 2037 and 2039. Subtly increasing the age at which you can access a state pension by a much higher rate than improvements in life expectancy: we know where this ends!

We are expected to pay a greater and greater element of national insurance and other taxes, while receiving the state pension for, on average, an ever-reducing number of years in retirement. Surely this is a win-win for the government?

As for us, we’ll just have to work until we drop, quite literally!

An interesting question….surely it makes sense? Unfortunately, it is not as simple as that when it comes to the financial calculations. Yes, reducing the retirement age would reduce the older element of the workforce. In theory, this would create more employment opportunities for younger people. So why won’t the government even consider this?

Some of the factors to consider:

In essence, the UK government is determined to make us work longer, contribute more in tax and national insurance and reduce our years in receipt of the state pension.

Over the last three years, we have seen significant changes in the state pension system. Dubbed "unaffordable" by politicians, there is a determination to make us work longer and pay more in overall taxation. This ensures that state pension payments today are funded by an ever-growing workforce.

Don’t let the politicians pull the wool over your eyes!

Mark Benson
Mark joined Age Group in 2020 and has over 10 years’ experience specialising in writing around property, finance, and investment subjects.
The content on pensiontimes.co.uk is for informational and educational purposes only and should not be construed as professional financial advice. Should you need such advice, consult a licensed financial advisor. Any references to products, offers, rates and services from third parties advertised are served by those third parties and are subject to change. We may have financial relationships with some of the companies mentioned on this website. We strive to write accurate and genuine reviews and articles, and all views and opinions expressed are solely those of the authors
What to read next...
Mark Benson
Spring Statement: What does it mean for pensioners?
Stela Gineva
UK state pension: Everything you need to know
Reno Charlton
Sunak likely to overturn push to review triple lock suspension and more of this week’s finance news
X
Everything you need to know about pensions, in one place. Get our FREE Ultimate Guide to Pensions now!
X
X