While not necessarily in total agreement, most people appreciate state pension and private pension retirement ages will increase as life expectancy improves. The following graph shows life expectancy based upon date of birth from 1981 to projections for 2023. This information, provided by Public Health England and the ONS, relates to males and females in England. 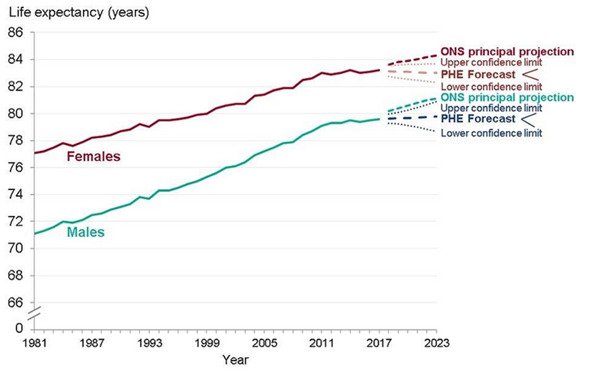 On 14 September 2021, the consultation period relating to changes in retirement age for private pensions came to a close. While the headline figures suggest that the age you can tap into your pension fund will increase from 55 to 57, there are some exceptions. It is these exceptions that are causing concern within the insurance industry.

This proposal is set to become law in 2028. However, already the ABI is calling for the proposals to be reworked.

The NMPA is the minimum age at which you can withdraw funds from your private pension scheme without tax penalties. From 6 April 2028, the NMPA will increase from 55 to 57, impacting those born after 6 April 1973. However, plans with an NMPA of 55 written into their rules will be exempt under the proposals.

If the current proposals pass into law, millions of people will still have access to their private pension funds at age 55. Historically there have been relatively rare exceptions for certain scenarios, such as terminal illness and specific occupations. The exceptions to the rule include footballers, boxers, dancers and trapeze artists.

Only recently, the government grasped the nettle of life expectancy and the financial impact on the pension industry. As a result, there will also be a two-year increase in the state pension retirement age, increasing from 65 to 67. This will come in at the same time as the proposed change in the private pension retirement age. If those receiving the state pension have to wait a further two years, it seems fair that those receiving private pensions see a similar extension?

The ABI has mentioned several specific issues such as:

There are serious concerns that many people will transfer their pensions to schemes with a protected pension age of 55. As a result, early access to pension assets may become the number one priority for members even if the transfers are not wholly appropriate. Aside from the potential impact on investment performance, there will likely be fees to consider.

While many people now have a private pension scheme, they may also have an array of employment pension funds accumulated over the years. These pension assets could be spread amongst numerous schemes. It is perfectly feasible that some plans will allow access to funds at age 55 while others may be 57. How would you work out the tax-free lump sum element? Would each fund require a different investment strategy as you approach different retirement ages? There are many questions to be addressed.

Reduced competition in the pension industry

As we touched on above, those pension schemes with a protected pension age of 55 written into the particulars would be more attractive. This could reduce competition amongst those pension providers that will need to adopt the increased retirement age. History shows that a reduction in competition can impact investment performance, fees and overall returns. A return to the dark ages!

At this moment in time, most of those with private pension schemes can access their funds at age 55. However, as we touched on above, different pension funds may become available at different times in the future. This could have a significant impact on short, medium and long-term financial planning. For example, those looking to use their tax-free lump sum to pay off their mortgage may not be able to access these funds for a further two years.

Why is the government dictating private pension retirement age?

Many people will look at the proposals to increase the private pension retirement age and wonder, what right has the government? This is a perfectly valid question when you bear in mind these are "private" pension funds. However, all private pension funds will contain an element of tax rebates from the government. Consequently, the authorities have a quasi-valid reason for dictating the personal pension retirement age.

In 2028, the retirement age for the state pension will also increase by two years from 65 to 67. So, it seems fair to increase the private pension retirement age from 55 to 57. This means that private pension income should, in theory, last an additional two years and potentially reduce future dependency on state benefits. An alternative may be to reduce the tax rebate, although this would significantly impact investment returns and funds available in retirement.

Will the government listen to the ABI?

The ABI has been critical of the proposed changes, making the government aware of specific concerns. We have seen many ongoing changes to pension regulations since 2014, with the ABI heavily involved. While there is every chance that the UK government may delay the proposals, nothing is guaranteed. However, is it fair to effectively negate perfectly legal pension scheme rules allowing access at 55?

While many will argue that ongoing pension reforms have been long overdue, those with private pension funds may need to adjust their financial plans. The underlying fact is that life expectancy improvements are placing pressure on the longevity of pension funds. As a result, change is required, but whether overriding existing pension scheme rules is "fair" will remain a hot topic.

Even a relatively minor adjustment of two years has the potential for a significant knock-on effect on the financial planning of individuals and families. For many, pension regulatory changes continue to be a hard pill to swallow but are there any other alternatives?

Mark Benson
Mark joined Age Group in 2020 and has over 10 years’ experience specialising in writing around property, finance, and investment subjects.
The content on pensiontimes.co.uk is for informational and educational purposes only and should not be construed as professional financial advice. Should you need such advice, consult a licensed financial advisor. Any references to products, offers, rates and services from third parties advertised are served by those third parties and are subject to change. We may have financial relationships with some of the companies mentioned on this website. We strive to write accurate and genuine reviews and articles, and all views and opinions expressed are solely those of the authors
What to read next...
Mark Benson
UK’s first National Pension Tracing Day launching 31st October 2021
Mark Benson
What does soaring inflation mean for your pension?
Krista Lomu
How does the Pension Tracing Service work?
X
Everything you need to know about pensions, in one place. Get our FREE Ultimate Guide to Pensions now!
X
X