The following graph gives you an idea of how inflation, measured by the CPI and CPIH, has increased since December 2011. To clarify, the CPI does not include owner-occupied housing costs whereby the CPIH does. The graph below also shows the Owner Occupier Housing (OOH) rate to give you an idea of the costs associated with owning, maintaining, and living in your own home. 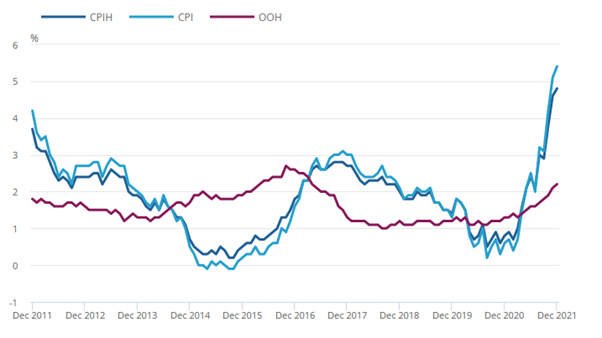 The Bank of England Monetary Policy Committee met in early February to give some further background. The regular review of inflation shows it is expected to hit 6% in February/March 2022 before peaking at 7.25% in April. So, what does soaring inflation mean for your pension?

How does inflation impact your pension?

There are several issues to consider concerning the relationship between inflation and your pension.

Under normal circumstances, the state pension increase from April 2022 would have been based on the triple-lock figures for the 12 months to September 2021. However, as people came off furlough and returned to work, average earnings inflation soared to 8.3% (ONS report). The increase in wages was deemed to be "artificial" by the government, and the triple-lock was suspended. It was decided that the rate of inflation would be used for the tax year 2022/23 hence a rise of just 3.1% in the state pension.

There are two types of private pension, defined benefit and money purchase, upon which inflation has a different impact.

Members of a money purchase pension scheme are basically left to market forces when seeking to secure pension income in retirement. For example, you may decide to acquire an annuity, offering a guaranteed income until you die. On the other hand, you may wish to enter drawdown where you withdraw funds from your pension pot each month.

The impact of inflation on annuities and drawdown

As with the different pension schemes, inflation has a different impact on annuities and those looking at a drawdown pension arrangement.

The most common annuities allow you to secure a guaranteed income at a set rate with an annual increase, often linked to inflation, for the rest of your life. Annuities typically start from a relatively low-income base in the knowledge that payments will increase in line with inflation until you die. However, many of those in retirement are attracted to a higher initial annuity income base without the guaranteed annual inflation increase. This is because they would lose out in real terms if inflation remained stubbornly high for a prolonged period but potentially benefit if it remained low.

As there is no fixed annual increase with a pension drawdown arrangement, you would have to increase your pension fund investments in line with inflation to maintain relative spending power. With inflation expected to peak at 7.25% in 2022, most money purchase pension schemes will see a relative reduction in their purchasing power.

Many retired households have been significantly impacted by the rising cost of energy, with non-retired households more affected by the increasing price of petrol. While often leading very different lifestyles, the inflationary pressures remained the same. Unfortunately, while those in employment can still offset some of the impact of inflation by annual wage rises, there is less scope for movement for those receiving pension income.

Addressing the challenges of inflation in retirement

Inflation in moderation keeps the UK economy growing, fuels wage rises and increases consumer spending. However, high inflation will increase the cost of materials, reducing company profits, prompting cost savings and potential job losses. So, how can pensioners address the challenges of inflation?

When savings rates are low compared to inflation, this will reduce the relative value of your pension assets held on deposit. Therefore, it is advisable to spread your pension fund investments across a wide range of asset classes.

If you have a money purchase scheme, perhaps a self-managed or third party managed pension, withdrawing the yield generated on an annual basis will maintain your central pension pot. Unfortunately, the annual yield generated is not guaranteed, and in some years, you may incur a loss. The degree of uncertainty will make planning challenging to say the least.

Once you have invested in an annuity, you are locked in for the duration, usually the rest of your life. However, you can invest in time-defined annuities that may benefit from changes in interest rates and inflation in the future. Staggering investment in annuities, investing an element of your fund in the short to medium term, ensures that you are not locked into what may become an unfavourable rate compared to changes in the future.

The dangers of inflation and your pension fund

High inflation, caused by increasing demand for goods and services, can cause economies to overheat and then eventually crash, prompting a recession. We have looked at the impact of inflation on specific areas of the pension industry. However, it is also essential to consider the impact on the broader economy. Consequently, it would be best if you took professional financial advice as you approach retirement so that you can find the best solution for your needs and your situation.

Mark Benson
Mark joined Age Group in 2020 and has over 10 years’ experience specialising in writing around property, finance, and investment subjects.
The content on pensiontimes.co.uk is for informational and educational purposes only and should not be construed as professional financial advice. Should you need such advice, consult a licensed financial advisor. Any references to products, offers, rates and services from third parties advertised are served by those third parties and are subject to change. We may have financial relationships with some of the companies mentioned on this website. We strive to write accurate and genuine reviews and articles, and all views and opinions expressed are solely those of the authors
What to read next...
Reno Charlton
Brits to get guidance to make most of retirement and more of this week’s finance news
Reno Charlton
Many could be affected by crippling lifetime allowance taxes and more of this week’s finance news
Reno Charlton
DWP reveals new measures to help simplify pensions and more of this week’s finance news
X
Everything you need to know about pensions, in one place. Get our FREE Ultimate Guide to Pensions now!
X
X